Hello Dear Friends and Readers.  Four Patches!  The block to make when you don’t know what to make!

After a one patch, what could be more simple than a Four Patch.  These units are so easy to make.  They are a fun unit but still can have so many possibilities.

I think it’s fair to say that there are so many quilting ideas and patterns now.  There are so many fabrics to choose from.  And then there is always the scraps.  A great block for any level of quilters experience.  Make them large, make them small and super cute.  Make them plain, or busy, dark or light, feminine or masculine (are we still allowed to say that?)  Anyway whatever way you like.

Or this quilt, which is also made of large four patches, perfect to display large print fabrics.

Rather than just having the scraps sit around, why not make four patches.  I strongly believe a quilt does not have to be complicated to be beautiful.  Four patches can always be made into something!   They can be ordered, have a theme or just random fabrics.  Make them with large blocks or small.  They can make a great border or quilt centre or part of another block.

They can be the centre of a star block. 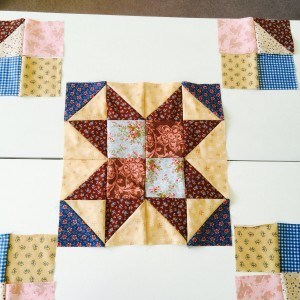 The blocks can be set straight or on point or in a zig zag formation.

This one is called Chocolate Box four patch

I love the way it makes secondary patterns for the eyes to follow. 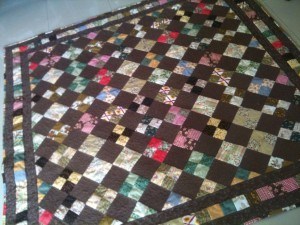 Put four together to make a sixteen patch, like these Postage Stamp Blocks.

Or sash them.  It’s all good.  Here’s another example of how they can build into other blocks like these

Small scraps become things of beauty and use.  And they come to life with a bit of quilting.

Four patches are often built into other blocks like these Four Patch Economy Blocks.

Combining them with matching squares is fun too, like these  Double Four Patches.

Believe it or not, a four patch can be used as the base to be transformed into a totally different block.  Here is one of just so many.

This is a very small taste of what simple four patches can do.  Isn’t it amazing how actually simple, can become ever so interesting with really endless possibilities.

So if you are in a bit of a quilters slump, and you don’t want to cut into your “good” fabric, why not make some four patches.  Really, what have you got to lose!

All the best for happy Four Patching!