Good Morning Dear Friends and Readers!  Boy, do I have a fun post for you today!

Even though I was up late last night, and I thought it would be so nice to get a sleep in, I got up early and made breakfast and my current favorite “Oat Milk”.  After cleaning up the kitchen, I thought I could go back to bed and just veg out for a little….. I began to peruse some of my older posts including this …

Then I got to thinking….I’m sure you all know that when making Hourglass Blocks, it can take a while….. all that marking lines with rulers and sew down each side, cut apart, reposition, rule another line, sew down each side again, cut apart…….Quite a few steps.  Or traditional for hand piecing, cut many triangles and sew together, and admittedly it will be correct, with the bias on the inside of the blocks.  Phew!

Here are some I have made.

Now we will break the rules a bit, and fast forward making hour glass blocks, fun fast and scrappy of course!

As always, all my fabrics have been prewashed.  All seams based on 1/4”.

Put the two four patches right sides together opposing the light and dark squares.   Put a pin exactly through the nested seams on each side to line them all up.     Sew a 1’4” seam all around the perimeter of the blocks.

Take to the cutting board. 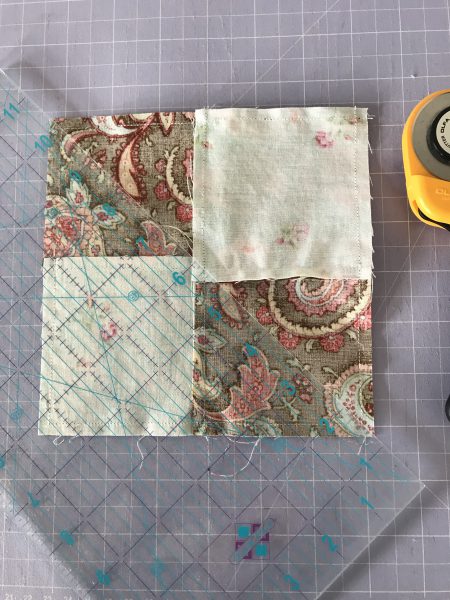 Rotary cut once on each diagonal.  Open each one to reveal your Hourglass Super Fast units!

Gently finger press.  Cut off all the doggy ears now.

Lay out the hourglass units into a four patch and sew together.  The edges will have bias seams.  Handle with care until they are sewn together!  Make sure that the four blocks are set out in the same layout of the light and dark so that the internal secondary pinwheel is going in the same direction, foe each block set.   According to Barbara Brackman’s Encyclopedia of Pieced Quilt Patterns (pg 166) 1195a, other popular names for this Hourglass block are Big Dipper, Yankee Puzzle, Envelope Quilt, The Whirling Blade (yes, I can see that!) Bow Ties and Pork and Beans.

I hope you will agree that this method is fast!  I think these have a lot of potential!

The Arrowhead Quilt Block Made Easy

Hope you are inspired!  Have a great day!